The closest airport is that of the city of Heraklion Kazatzakis Airport. Aegean Airlines fly regularly to Heraklion from Athens and Thessaloniki (Salonica). (Note that Aegean flights might not appear at travel agent computers in Europe and overseas).

From April to October there are also numerous direct charter flights from many places in Europe.

There are three major shipping companies that serve Heraklion out of the Piraeus port of Athens : Minoan Lines, ANEK Lines and Super Fast Ferries Lines.

There are also seasonal connections with the Cycladic Islands and elsewhere in the Aegean sea. The Heraklion Port is very close to the center of town (~1 Km) The best way to reach the department of physics from the port is again by taxi (~11 Kms). Some popular hotels are located by the beach in the Amoudara suburb: the best way to get there from the airport is again by taxi (~10 Kms) or bus. There is also a bus serving Amoudara starting from Heraklion center. It is infrequent in low season. See below for below for bus schedules.

In case you want to reach the Physics Department from Ammoudara you have to change bus once. First you take bus line No.6 (towards the center of the city) and exit at Giofiro stop. There you have to take one of the two buses, No.11 or No.8 mentioned above.

To return to the city center from the Physics Department take bus No. 1 (to the Airport – AERODROMIO) or bus No. 20 (to the Port – LIMANI). Both busses pass through the city center. Be sure NOT to take bus No. 2, which goes to the university campus in Knossos, except in case you want to visit the archaelogical site in Knossos.

You may check the official bus schedule here.

Bus tickets can be bought at kiosques (these are omnipresent in Greece as you will soon realize). Inside the Physics Department they are sold at the coffee shop in the basement.

Keep in mind that there are two different bus tickets that you may need and this is because Heraklion city is divided into two areas, the center and the suburbs.

The first, is painted orange (its cost is 1.20 euros) and it is valid from the airport and in the area of the city enclosed by the peripheral road (roughly to Carrefour shop (in the direction to Ammoudara) or the church of Estavromenos (in the direction to the university)).

To go to the second region (where the Physics Department is ), a blue ticket is needed (its cost is 1.70 euros). You can get an idea of the regions by looking at the maps below.

Taxi is a very convenient means of transport as it is immediate (buses are in general slow and may be infrequent in parts of the day) are reasonable priced. The downside is that the overwhelming majority of taxi drivers will try to cheat you once they realize you are not a local. This is why it is important to read further below.

special charge to and from the airport (but not other stations)=2.83 Euros,

special charge to and from the Seaport and out ward bound=1.17 Euros,

for each luggage weighting more than 10 Kgs add 0.43 euros,

if you arrange in advance a later apointment or call Radiotaxi, add from 0.00 to 6.15 euros.

Knowing the prices above almost gives you a good estimate on what you should expect to pay. Double tariff is applicable outside the peripheral (National) road (same area as for the blue bus ticket) but only if you are going outwards from the city center. You can get an idea of the region around Heraklion by looking at maps below.

For example taking a taxi from the airport to the department without heavy luggage is expected to cost (double tariff here) about 15 euros. Depending on traffic the trip may last 15-25 minutes.

A taxi from the airport to the city center on the other hand is expected to cost 6-7 euros (single tariff, not from the National road). A similar cost is expected from Amoudara to the department.

Reaching the Department by car

If you are coming from another part of Crete most probably you are using the National Road that serves East-West the north of the island. There are 6 exits that serve the city of Heraklion and its surroundings.

The first exit from the West is serving the suburb of Gazi.

The next exit (second from West) is the one you have to exit in order to go to the physics department (University and University Hospital also called “ΠΑΓΝΗ”).

If you are coming from the East, be careful as it is a double exit. If you want to go to the physics department exit at the second exit (500m after the first)

The next one (third from the West) is almost immediately after the previous one and serves that Ag. Ioannis Hostos and Malades area. There is also an exit a bit further on opposite side with indications “Foinikia”

The next one (fourth from the West) has an overpass and serves the center of town.

The one further East (fifth from the West) serves Eastern Heraklion and the final one serves the Heraklion airport.

After exiting the National road (coming from the West) you turn right on the perpendicular road. If you are coming from the East you should be careful to exit at the second exit, that will bring you to the same perpendicular road but now you should turn left. If you take the first exit by mistake you exit on the same road but you must turn in the opposite direction. Make a U-turn when you can).

You follow the signals to the Hospital and the Technology Institute FORTH (ITE). You continue on that road as it winds for about 2 Kms until you see on your right a few shops, then a a Kiosque and immediately afterwards you must turn right (there is a sign indicating FORTH). You continue for about a kilometer and then you see several white buildings, one to the left, the others to the right.

The second to the right is the Physics and Biology building. You park, proceed to the main entrance and enter. The Crete Center for Theoretical Physics is on the second floor. If you are coming from the center of town you have to get on 62 Martiron Street and turn left onto the road that leads to Moires. You will pass under the National Road and then you follow the previous directions.

Sometimes it is convenient to rent a car. We have been using the bestcars company that is providing reasonably priced mostly small cars with air-conditioning and full insurance. You should mention you are a visitor to the Physics Department.

There are several other local and international car rental companies. You may find them at the airport website. 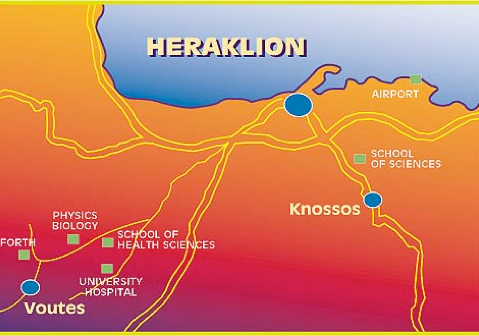 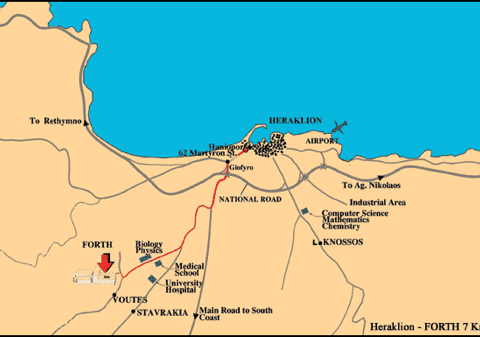 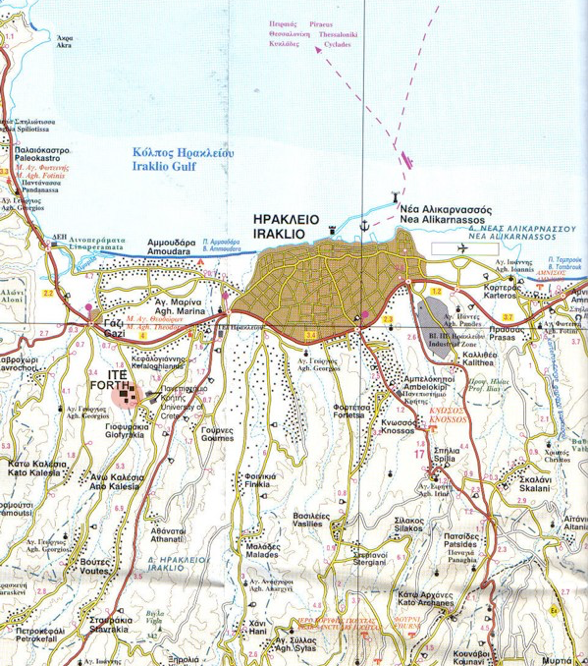 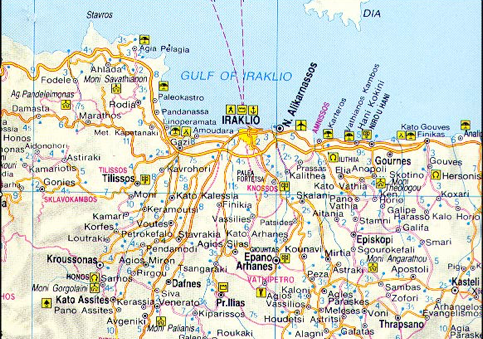